The holiday season is here, and employees are looking forward to celebrating with their family and co-workers.  However, the office holiday party – an anticipated yearly tradition in many workplaces – has now become a cause for concern for employers, especially amidst the current national conversation about workplace sexual harassment.

What is the result?  Many companies are cancelling holiday party plans, or hosting alternative parties with less alcohol and more day light. 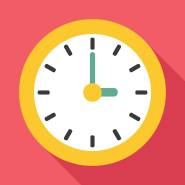 California Assembly Bill (AB) 5, the Opportunity to Work Act, was recently approved by the California Assembly Committee on Labor and Employment in April 2017.  The Appropriations Committee postponed a hearing on the bill that was scheduled for May 3, 2017.  Given the strong industry opposition to this bill and its harmful impact on employers, it is likely that the Appropriations Committee is taking a closer look at the bill and the negative END_OF_DOCUMENT_TOKEN_TO_BE_REPLACED 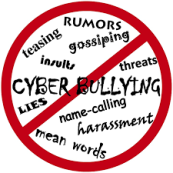 One lesson companies of all sizes can learn from the sexual harassment claims that Uber is facing is that an employer needs to set clear restrictions on harassment and make a conscious effort to hold employees accountable to those workplace standards.  In particular, sexual harassment has been a significant issue in the workplace since men and women began working alongside each other.  However, it wasn’t until 1964, when Congress passed Title VII of the Civil Rights Act, that discrimination and harassment in the workplace was explicitly prohibited at the federal level.  Since then, several more anti-discrimination laws at both the state and federal level have been passed and countless judicial opinions denouncing unrestrained work culture and impermissible acts have been published.  So why is this still a hot button issue in the workplace over 50 years later?

Some may be of the opinion one complaint of workplace harassment is not a big deal because it is not reflective of the entire workforce or the values of the company generally.  While this may be true in some cases, it is important to investigate any such complaints because the root of the problem may be broader, such as END_OF_DOCUMENT_TOKEN_TO_BE_REPLACED 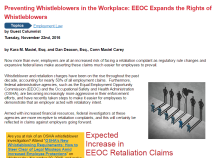 BLR recently published a two piece article in the HR Daily Advisor by Kara Maciel and Daniel Deacon, of Conn Maciel Carey’s national Labor & Employment Law Practice Group, regarding government agencies increased focus on whistleblowers and retaliation, and how employers can avoid whistleblower and retaliation complaints from their employees.

Over the past year, there have been significant changes in both the Equal Employment Opportunity Commission (“EEOC”) and Occupational Safety and Health Administration (“OSHA”) that make it easier for employees to demonstrate that an employer acted with retaliatory intent.  Given this increased focus on retaliation, it is prudent for employers to take steps to avoid whistleblower and retaliation complaints from their employees, and ensure that they have adequate workplace policies and complaint systems to address retaliation complaints before an employee complaint lands before the EEOC or OSHA.

Part 1 of the article, titled “Preventing Whistleblowers in the Workplace: EEOC Expands the Rights of Whistleblowers,” focuses on how the EEOC has modified the standard it uses to evaluate retaliation claims, and has become more aggressive in its whistleblower enforcement efforts. END_OF_DOCUMENT_TOKEN_TO_BE_REPLACED 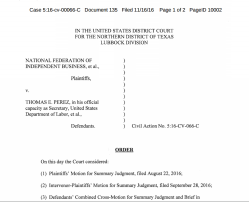 On November 16, 2016, a Texas federal judge permanently blocked the U.S. Department of Labor (“DOL”) from enforcing its persuader rule in National Federation of Independent Business, et al. v. Thomas E. Perez, et al., Case No. 5:16-CV-066-C.  As we previously reported in a prior post, when the DOL published the final rule in March 2016, it imposed substantial reporting obligations on employers.  The old rule required disclosure of the use of an outside consultant if the consultant engaged in direct persuader activity, such as if the consultant directly communicates with employees about union representation.  The new rule, however, added reporting for indirect persuader activities; for example, providing communication materials to an employer to hand out to employees.  These types of activities typically, but not exclusively, arise in the context of a union organizing drive.

If there is one issue that has remained a hot topic in employment news throughout 2016, it is pay equity and transparency.  These topics have not only garnered attention at the federal level but at the state level as well.

The EEOC proposed significant changes to the EEO-1 report, a mandated compliance survey containing employment data, where it will begin collecting pay data based on certain demographic criteria in 2017.  Additionally, many states, including Maryland, are taking their own steps to ensure pay equity in the workplace.  These laws will likely trigger significant enforcement efforts by federal agencies and the states; thus, employers should be prepared to respond to investigations into their pay practices.  However, employers can take several steps to help limit potential liability over the next year.

In February 2016, the EEOC announced a major revision to the Employer Information Report (EEO-1) requiring all employers with more than END_OF_DOCUMENT_TOKEN_TO_BE_REPLACED

The New Rule & its Impact on Employers

The long awaited controversial rule was released in May 2016 to the disdain of employers, as we’ve explained in prior blog posts.  The most significant change in the final rule is the new $47,476.00 minimum threshold salary required to qualify as an exempt employee, representing more than a 100% increase from the present level and a huge financial undertaking for employers.  All employers throughout END_OF_DOCUMENT_TOKEN_TO_BE_REPLACED

The Summer/Fall 2016 issue of Virginia Human Resources Today Magazine featured an article by Kara Maciel and Daniel Deacon, of Conn Maciel Carey’s national Labor & Employment Law Practice Group, regarding “The Impact of the 2016 Presidential Election on the Supreme Court and Employment Law.”

The article discusses the influence that the next President will have on shaping the Supreme Court – with the potential to nominate up to four new Supreme Court Justices – and the impact that this could have on employers, unions, and the workplace in the near future.  In light of Justice Scalia’s death, the Court is more or less split between liberal and conservative Justices.  The current political landscape leading up to the election suggests that Donald Trump will nominate a conservative justice that could step into Justice Scalia’s role on the bench as a heavy conservative justice and Hilary Clinton will nominate a candidate more akin to Justice Sotomayor – arguably one of the most liberal justices currently on the Supreme Court.  The President’s ability to appoint the next Supreme Court justice to replace Justice Scalia and the potential to appoint three more will surely influence the law on several important labor and employment law issues including a union’s ability to collect fees from workers who do not join the union, the Affordable Care Act’s contraception mandate, and employer grounds to challenge class action lawsuits.  Ultimately, there is a lot at stake in this year’s presidential election – not only will it determine who will lead the country’s executive functions and federal regulatory agendas, but it will also have a dramatic and long-standing impact on the future of the Supreme Court and judicial opinions impacting workers and workplace rights for years to come.

To read more on this interesting topic, here is a link to the full article in Virginia Human Resources Today Magazine.

With the start of a new 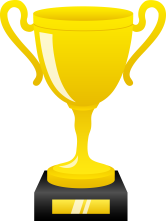 NFL football season around the corner, many employers are likely hearing chatter around the workplace about the upcoming season, predictions, and office football leagues.  Office betting pools can have both a positive and negative impact on the workplace.  While most employees view betting pools as typical office fun, employers often suffer the consequences, such as a drain on productivity and resources as well as the legal issues that go with employees gambling at work. However, employers can take certain steps to ensure that gambling in the workplace does not violate state law, impact productivity, or result in multiple HR complaints while maintaining high employee morale.

Office betting pools and online gambling have become commonplace in everyday society and many employers themselves probably participate in fantasy leagues.  Both the fall and spring bring new excitement to the office as employees get to revel in what seems to have become somewhat of a sacred tradition – NFL Fantasy Football and NCAA March Madness.

The amount of money that Americans spend during these two times of the year is shocking.  According to the Fantasy Sports Trade Association, roughly 57.4 million people will participate in fantasy sports leagues this year, with an estimated spending of $556 per user.  That amounts to about $31.9 billion in gambling on fantasy sports.  The fantasy sports fever that continues to sweep the country cannot be understated.  Within the past decade, the number of people gambling on fantasy sports and their spending habits have more than tripled.  During March Madness alone, NCAA tournament bracket pools cause Americans to pour approximately $3 billion into online bracket pools, and that doesn’t even count the numerous contests put on by END_OF_DOCUMENT_TOKEN_TO_BE_REPLACED

On July 14th, the House Appropriations Committee approved a $161.6 billion  draft Labor, Health, and Human Service bill that contains several provisions that would prevent the Department of Labor (“DOL”) and the National Labor Relations Board (“NLRB”) from using money to enforce recent regulations and policies that have caused considerable controversy for employers.