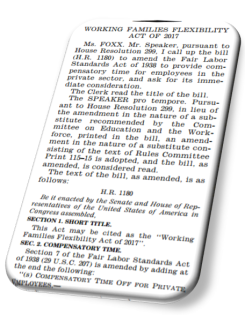 On May 2, 2017, the U.S. House of Representatives passed the Working Family Flexibility Act of 2017 – a bill that would amend the Fair Labor Standards Act (FLSA) to permit private employees to take paid time off instead of receiving monetary overtime compensation when working more than 40 hours per week.  While uncertainty looms over the fate of the bill as it moves to the Senate, if the bill is passed and becomes law, it would be a major amendment to the FLSA.

Private sector employers must be vigilant of this bill as it progresses through Congress and be prepared to implement procedures to offer comp time instead of overtime wages, and establish a system to keep track of the amount of comp time employees accrue. END_OF_DOCUMENT_TOKEN_TO_BE_REPLACED