On February 11th, Kara M. Maciel, Fern Fleischer-Daves and Lindsay A. DiSalvo presented a webinar regarding What Employers Need to Know About COVID-19 Vaccine. 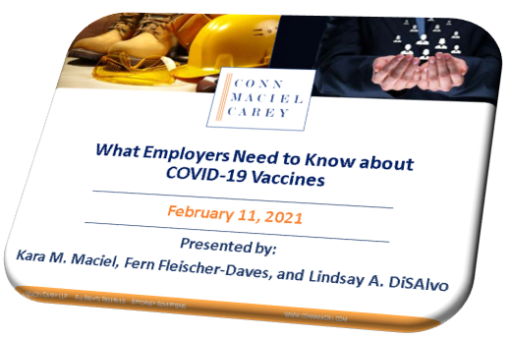 In December 2020, two COVID-19 vaccines received emergency use authorization from the US government and several more vaccines may be approved in the coming months. In the initial phases, front-line health care workers, nursing home residents, persons over 75 years of age, and others with underlying health conditions were given first priority. Many employers want to have their “essential workers” or all of their workers vaccinated as soon as possible.

END_OF_DOCUMENT_TOKEN_TO_BE_REPLACED

On Thursday, February 11th from 1:00 PM – 2:15 P.M. EST, join Kara M. Maciel, Fern Fleischer-Daves and Lindsay A. DiSalvo for a webinar regarding What Employers Need to Know About COVID-19 Vaccine.

In December 2020, two COVID-19 vaccines received emergency use authorization from the US government and several more vaccines may be approved in the coming months. In the initial phases, front-line health care workers, nursing home residents, persons over 75 years of age, and others with underlying health conditions were given first priority. Many employers want to have their “essential workers” or all of their workers vaccinated as soon as possible.

During this webinar, Conn Maciel Carey’s OSHA and Labor & Employment attorneys will discuss these important questions:

END_OF_DOCUMENT_TOKEN_TO_BE_REPLACED

COVID-19 has shifted the National Labor Relations Board’s (“NLRB”) longstanding policy that representation elections should generally be conducted manually.  In a recent example of COVID-19’s impact on representation elections, the Acting Regional Director for Region 10 issued a Decision and Direction of Election on January 15, 2020 requiring an election petitioned for by the Retail, Wholesale and Department Store Union (“the Union”) occur by mail-ballot because of the “undeniable presence of COVID-19 both inside and outside the Employer’s facility.”  The employer, Amazon.com Services LLC, requested a manual election – still the applicable presumption – while the Union requested an election by mail ballot.  In deciding that the election should take place by mail, the Regional Director cited guidance issued by the Centers for Disease Control related to general elections and guidance issued from the Office of the General Counsel as to what protocols should be used for a manual election during the pandemic.  But the most significant guidance the Regional Director relied on in mandating a mail-ballot election was the framework developed by the NLRB in the Aspirus Keweenaw case.

In Aspirus Keweenaw, the NLRB reviewed a decision from the Regional Director for Region 18 that a mail-ballot election should occur at a hospital in Michigan over a manual ballot election because of “the extraordinary circumstances presented by the COVID-19 pandemic.”  The NLRB began its analysis by acknowledging that there is a presumption in favor of manual elections, particularly as statistics show that participation is generally higher for manual elections.  However, the NLRB recognized that its approach to elections must evolve based on the unique circumstances created by the COVID-19 pandemic and the need for more defined parameters as to when a mail-ballot election is appropriate based on changing pandemic conditions and in consideration of its preference for manual elections.  Specifically, the NLRB laid out six situations that will normally suggest a mail-ballot election:

END_OF_DOCUMENT_TOKEN_TO_BE_REPLACED

On Wednesday, January 20, 2021 at 10:00 AM PT / 1:00 PM ET, join Andrew J. Sommer and Megan S. Shaked for a webinar regarding California Employment Law Update for 2021: New Legal Requirements and Practical 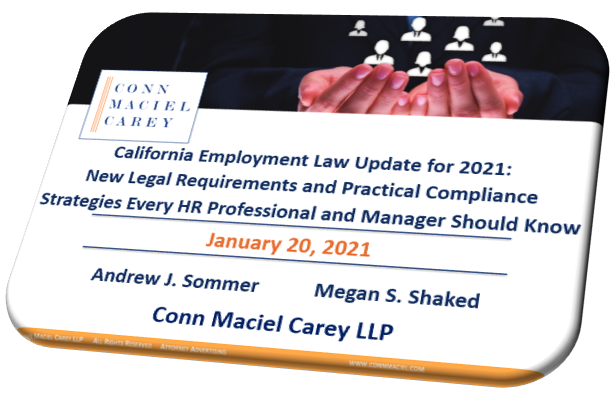 Compliance Strategies Every HR Professional and Manager Should Know.

2021 brings significant changes for California employers, from legislation and Cal/OSHA rulemaking associated with COVID-19 prevention to wage and hour developments. This webinar will review compliance obligations for companies doing business in California, as well as discuss the practical impact of these new laws and best practices for avoiding potential employment-related claims.

​Participants in this webinar will learn about:​ END_OF_DOCUMENT_TOKEN_TO_BE_REPLACED

The legal landscape facing employers seems as difficult to navigate as it has ever been.  Keeping track of the ever-changing patchwork of federal, state and local laws governing the workplace may often seem like a full-time job whether you are a human resources professional, in-house attorney or  business owner.  Change appears to be the one constant.  As President Trump’s Administration comes to an end, employers will continue to closely track the changes taking place at the NLRB, the DOL and the EEOC.  At the same time, a number of states will continue introducing new laws and regulations governing workplaces across the country, making it more important than ever for employers to pay attention to the bills pending in the legislatures of the states where they operate.  This complimentary webinar series will focus on a host of the most challenging and timely issues facing employers, examining past trends and looking ahead at the issues most likely to arise.

END_OF_DOCUMENT_TOKEN_TO_BE_REPLACED

From all of us here in the national Labor & Employment Practice Group at Conn Maciel Carey, to all of you, happy holidays and happy New Year.  We wish you a joyful and safe holiday season, and a 2021 that helps us all forget about this challenging year.

Please enjoy this holiday greeting from the CMC family to your family:

Despite this relentless year, we have so much to be thankful for at Conn Maciel Carey, but most of all, we thank you all for continuing to turn to us for counsel and legal services.  Please contact us if you have questions about any of the topics we have covered here on the Employer Defense Report blog, or if you have ideas for other subjects we should be covering.  And of course, contact any of us if there is ever anything our national Labor & Employment Practice Group at Conn Maciel Carey can do to help you or your company with Labor & Employment law issues.

2020 has been another banner year for California employment laws, with legislation and Cal/OSHA rulemaking associated with COVID-19 prevention and reporting taking center stage.  In our annual update of new employment laws impacting California private sector employers, we lead off with California’s COVID-19 related laws, given their far-reaching impact on the state’s workforce during the pandemic as employers continue to implement measures to prevent the spread of COVID-19 in the workplace.  We have also addressed other substantive legislative developments, particularly in the areas of wage and hour law and reporting of employee pay data.  Unless otherwise indicated, these new laws will take effect on January 1, 2021.

Temporary Emergency COVID-19 Prevention Rule Not to be outdone by Virginia OSHA, Oregon OSHA or Michigan OSHA, Cal/OSHA adopted an onerous COVID-19 specific temporary emergency regulation effective November 30, 2020.  Below is a detailed summary of how we got here, as well as an outline of what the rule requires.

On November 19, 2020, the California’s Occupational Safety and Health Standards Board (Standards Board) voted unanimously to adopt an Emergency COVID-19 Prevention Rule following a contentious public hearing with over 500 participants in attendance (albeit virtually).  The Emergency Rule was then presented to California’s Office of Administrative Law

for approval and publication.  The Rule brings with it a combination of requirements overlapping with and duplicative of already-existing state and county requirements applicable to employers, as well as a number of new and, in some cases, very burdensome compliance obligations.

The Standards Board’s emergency rulemaking was triggered last May with the submission of a Petition for an emergency rulemaking filed by worker advocacy group WorkSafe and National Lawyers’ Guild, Labor & Employment Committee.  The Petition requested the Board amend Title 8 standards to create two new regulations END_OF_DOCUMENT_TOKEN_TO_BE_REPLACED

On Wednesday, December 16th at 1:00 PM ET, join Lindsay A. DiSalvo and Ashley D. Mitchell for a webinar 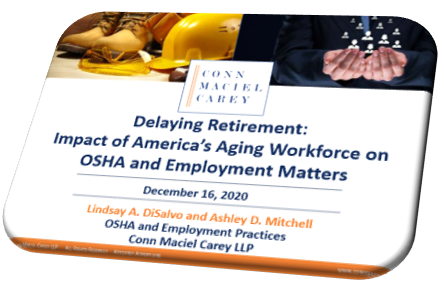 regarding Delaying Retirement: Impact of America’s Aging Workforce on OSHA and Employment Matters.

The single biggest factor affecting safety and health in America’s workplaces today is our aging workforce. Older workers offer valuable experience and job knowledge, but with that comes an increased risk of serious workplace injuries due to physiological changes affecting flexibility, strength, vision, hearing, and balance. Although older workers experience fewer total injuries than their junior counterparts, the injuries they do have tend to be more severe and require longer recovery times. With more than 30 million workers 55 years or older expected to be in the U.S. labor force by 2025, and huge numbers of workers remaining in the workforce well past traditional retirement age, employers face unique challenges in keeping employees safe and healthy and complying with a host of state and federal laws.

This webinar will review the realities of our nation’s aging workforce and how employers must carefully address these realities without running afoul of OSHA regulations and federal and state anti-discrimination laws, such as Title VII of the Civil Rights Act, the Age Discrimination in Employment Act, and the Americans With Disabilities Act.

Participants in this webinar will learn about: END_OF_DOCUMENT_TOKEN_TO_BE_REPLACED

national OSHA Practice, and special guest Dr. John Howard, the Director of the National Institute for Occupational Safety and Health (NIOSH), for a one-on-one Q&A event regarding COVID-19 in the workplace.

Cases continue to spike throughout the United States, while employers try to keep pace with ever-shifting guidance from the CDC, OSHA, and state and county health departments, and face several new COVID-19 emergency regulations around the country. NIOSH works closely with the CDC to develop its COVID-19 guidance and to help educate Industry on effective infection control and response strategies. NIOSH also provides support to the White House Coronavirus Taskforce and assists states and local health departments develop effect strategies and policy to address COVID-19 in the workplace.

Through this Q&A session, Dr. John Howard, the Director of NIOSH for 17 years and counting, provides detailed insight and advice on the workplace safety and health implications of COVID-19 and what employers can expect next and how they can protect their workers from this pandemic. Participants in this webinar will learn: END_OF_DOCUMENT_TOKEN_TO_BE_REPLACED 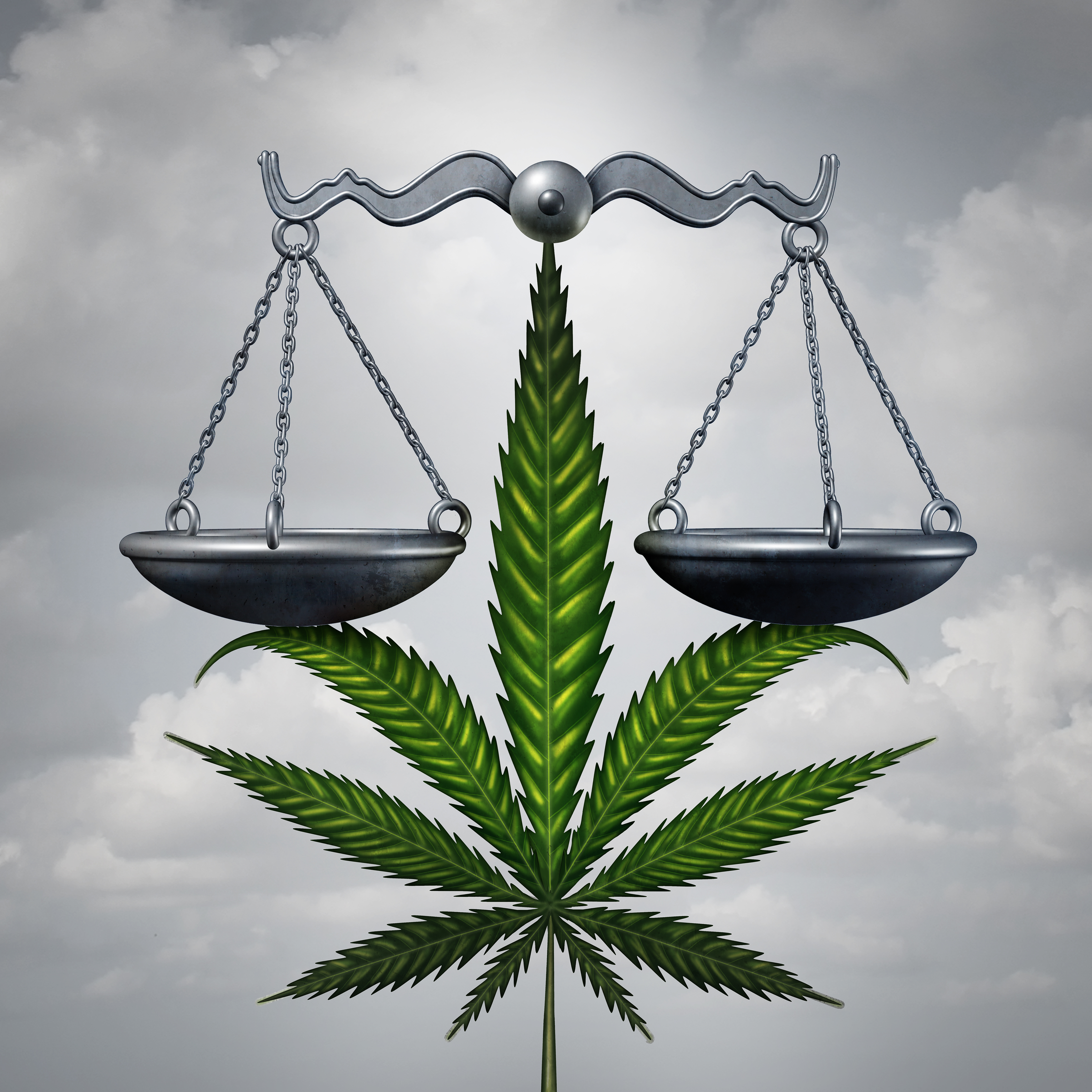 Fifty years after the Controlled Substances Act was passed and marijuana was deemed illegal under federal law, the legality of marijuana is finally being addressed by Congress, as the U.S. House of Representatives is scheduled to vote this month on a bill that seeks to end the federal law that prohibits marijuana use – a vote on the most comprehensive marijuana reform legislation in U.S. history that could have sweeping implications.

Specifically, the Marijuana Opportunity Reinvestment and Expungement Act (aka the “MORE Act”) intends to de-schedule cannabis from the list of Schedule I controlled substances under the Controlled Substances Act.  The Act also intends to expunge many convictions, tax cannabis sales at 5%, invest in grant programs with a heavy focus on social equity, and provide cannabis businesses access to Small Business Administration loans.

The vote in the House arrives roughly a month after five states — New Jersey, Arizona, Montana, South Dakota and Mississippi — voted on Election Day to legalize recreational or medical cannabis. Cannabis is already legal, to some degree, in most U.S. states, and the support for reform is only increasing.  Notably, every single marijuana reform measure placed on state ballots in 2020 passed, representing a continuation of the state-level reform movement that has consistently expanded in election after election.  As we move into 2021, medical marijuana is now legal in 34 states and the District of Columbia and recreational marijuana is legal in 15 states and the District of Columbia. Staunch activism for marijuana reform also continues to grow in several other states where legislation is expected to be introduced within the next year, including New York, New Mexico, Rhode Island, Missouri, North Dakota, and Florida.

While the MORE Act is expected to pass the House with some bipartisan support, it remains unlikely that END_OF_DOCUMENT_TOKEN_TO_BE_REPLACED