By Lindsay A. DiSalvo and Beeta B. Lashkari

When OSHA receives a complaint related to worker safety and health or a severe injury report, one action by OSHA is to give the employer an opportunity to respond before it takes the more extreme action of opening an inspection.  In addition, when OSHA receives an allegation of retaliation, it must provide the employer a chance to explain why the adverse employment action of which it is accused was legitimate or did not occur as alleged.  These responses are an opportunity for the employer to avoid an inspection or litigation of a retaliation claim.  A strong response could assuage OSHA’s concerns and resolve the complaint in a favorable manner for the employer.  However, these responses can also create a written record of admissions to which OSHA can hold the employer accountable, and any supporting documentation may be closely scrutinized and used to create liability.

Thus, employers must ensure there is a procedure in place for managing and developing the responses to these situations, and be strategic about the information they share with OSHA in the response.  We are pleased to share the following tips and strategies for how to effectively address such complaints. 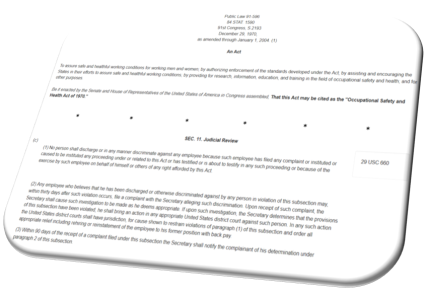 To start, although OSHA enforces whistleblower standards under 22 different statutes, the agency receives most of its retaliation claims (over 62%) under Section 11(c) of the Occupational Safety and Health (OSH) Act. Section 11(c) prohibits employers from retaliating against workers who in good faith attempt to exercise a worker safety-related protected right under the law.

While the vast majority – about 71% – are either dismissed by OSHA or withdrawn by the employee, the sheer number of complaints OSHA receives, and the fact that nearly 30% of them do end in favor of the employee, should be more than motivation for employers to thoroughly address each one filed against them.  This is particularly true because, under Section 11(c), employees can be entitled to substantial remedies, such as reinstatement, back pay, front pay, compensatory damages, and punitive damages if the employee can show “evil motive or callous indifference” on the part of the employer.

Understanding the elements of the employee’s case, and how to defend against them, therefore, is essential.  Prior to 2016, the employee had to establish a prima facie case of retaliation in order to maintain a claim and proceed through an OSHA investigation.  Now, however, OSHA guidance in its Whistleblower Manual states that an employee need only prove its claim has merit.  As such, the bar for employees is much lower, and a complaint can go forward even if there is only reasonable cause to believe a violation occurred.

Nonetheless, the elements of a whistleblower claim under Section 11(c) are similar to the elements under other types of retaliation claims.  The employee must prove that:

If the employee can show the required elements, the employer then has the opportunity to counter them by demonstrating it had a legitimate, non-discriminatory reason for the adverse action.  The reason may be insubordination or poor performance, among a host of other reasons.

It is important for employers to understand the elements an employee must establish and its own potential defenses because these are the topics an employer should address in its position statement to OSHA.  Essentially, this is the employer’s first and best chance to submit a persuasive written response to the allegations in the complaint, so drafting this statement is the opportune time to seek assistance from experienced legal counsel.

Here are some of our best practice tips:

Under Section 8(f)(1) of the OSH Act, every employee is given the right to complain to OSHA and ask for an inspection when s/he believes there has been a violation of a health and safety standard.  OSHA, however, simply does not have the resources to conduct an inspection for each and every complaint it receives.  Accordingly, it must decide whether the complaint merits an on-site inspection, or whether the agency will send out a Notice of Alleged Hazard(s) (also known as a “Phone and Fax Complaint”) to the employer.

OSHA has a list of priority complaints that typically result in an on-site inspection. 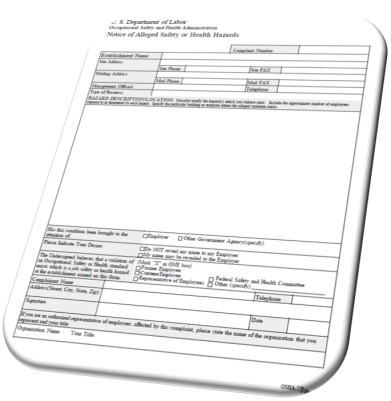 If OSHA does initiate an on-site inspection, we recommend you check out Conn Maciel Carey’s OSHA Inspection Toolkit and contact experienced OSHA defense counsel for assistance.

Where OSHA decides not to conduct an inspection, it will still send out a Notice of Alleged Hazard(s) to solicit additional information from the employer related to the complaint.  This notice will convey the specific safety and/or health complaint that OSHA received, and will request that the employer investigate and respond — either to rebut the truth of the allegation or to describe the corrective actions the employer has taken.  An inadequate response to that Notice can trigger an on-site inspection, and can be used against the employer in that inspection and potential enforcement process.

Accordingly, it is important to provide an effective and careful response.  Here are some of our best practice tips for responding to Notices of Alleged Hazard(s):

In 2015, OSHA’s new injury and fatality reporting rule became effective, significantly revising the triggering events for reporting workplace accidents to OSHA under the Agency’s Injury and Illness Recordkeeping regulations at 29 C.F.R. 1910.104, et seq.  The new Severe Injury Reporting Rule lower the threshold for proactively reporting a catastrophic incident from the hospitalization of three or more employees to the hospitalization of a single employee, and added amputations (including partial amputations) and losses of an eye to the types of injuries that employers must proactively report.  By lowering the threshold from three employees hospitalized to a single employee has dramatically increased the number of incidents that are not reported to OSHA, from at most 50 a year to tens of thousands today.

Because OSHA has been flooded by reports of worker injuries, it became impossible for the agency to respond to each, or even a meaningful percentage of reports, with an on-site enforcement inspections.  Accordingly, OSHA issued “Enforcement Procedures for [OSHA’s] New Reporting Requirements,” which advises its field offices when to conduct on-site inspections, or conversely, when to not inspect, and instead to utilize its new “Rapid Response Investigation” (RRI) protocol.

According to its Enforcement Procedures, OSHA categorizes injury reports into one of three buckets to help make its decision.  Category 1 reports are supposed to always result in an onsite inspection.  These include:

Category 2 reports may result in an on-site inspection or RRI, based on the discretion of the OSHA Area Director after s/he evaluates a variety of factors, including whether:

Category 3 — everything else — always result in RRIs.

Here are some of our suggestions for how best to respond to an RRI request:

For much more information about all of this, check out Conn Maciel Carey’s April 2019 webinar: “Guide to Responding to 11(c) Safety Retaliation Complaints and Notices of Alleged Hazards / Employee Safety Complaints.”

Participants in that webinar learned about the following:​

Here are links to a copy of the slides and a recording of the webinar.  Let us know if you have questions about responding to OSHA whistleblower actions or employee safety complaints, or any any other OSH law issues.  We would love to be a resource for you.

The April webinar was the 4th webinar event in Conn Maciel Carey’s 2019 OSHA Webinar Series.  Click here to view our full schedule, detailed program descriptions, and individual registration pages for the remaining webinars in the 2019 OSHA Webinar Series.  To register for all of the remaining programs in the 2019 series, click here to send an email request, and we will get you automatically registered.

If you missed any of our past webinars in our annual OSHA Webinar Series, here is a link Conn Maciel Carey’s webinar archive.