By:   Kara M. Maciel, Jordan B. Schwartz and Daniel Deacon

On March 23, 2016, the U.S. Department of Labor (DOL) finalized the long-awaited “persuader” rule requiring employers and their labor relations consultants, including attorneys, to report any activities by these consultants that could be construed as an attempt to “persuade” employees regarding their right to organize a union and bargain collectively.  Although employers were required to report when 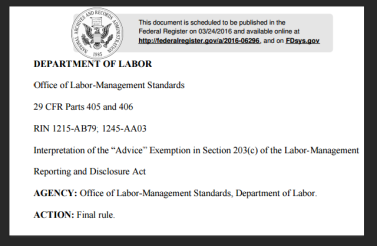 consultants spoke to employees under existing law, the new rule will require employers and consultants to report activities where a consultant is only tangentially involved in giving advice, even if that advice is never considered or followed by the company.  The rule will have a major impact on businesses as it overturns long-standing precedent regarding how employers can legally manage organizing campaigns.

The DOL’s insistence on imposing stricter reporting requirements on employers stems from what the DOL perceived as a loophole in the Labor Management Reporting and Disclosure Act of 1959 (LMRDA).  The LMRDA requires labor organizations, consultants, and employers to file reports and disclose expenditures on labor-management activities.  The law was designed primarily to prevent abuse, corruption, and improper practices by labor organizations, employers, and labor relations consultants.  It requires two sets of reports: (1) labor organizations have to report a wide array of financial information, including information about how much they spend on organizing campaigns; and (2) employers who hire labor relations consultants to directly persuade employees one way or another on organizing and bargaining issues must also report these relationships, including the amount of money spent on these activities.  However, Section 203(c) of the LMRDA does not require employers to report when they hire a consultant simply for advice, which is commonly referred to as the advice exemption.  In the past, “advice” was interpreted as including “indirect” persuasion, thus relieving employers from reporting guidance they received from consultants regarding what to say to employees.

With the promulgation of this new rule, the DOL has essentially eliminated the advice exemption even though it claims that the rule still exempts agreements by which consultants agree to merely provide advice – defined as “recommendations regarding a decision or course of conduct.”  By eliminating the advice exemption, employers are discouraged from taking reasonable steps of hiring outside counsel and consultants to ensure that they are complying with the increasingly stringent labor laws.  Companies routinely rely on the support of counsel to facilitate and manage organizing campaigns.  Now, the very advice employers seek to rely on in complying with the law could potentially be used against them.

The rule also raises concerns about the confidential nature of the attorney/client privilege, the nature in which traditional labor law firms will now conduct business, and the overall cost on employers to comply with the LMRDA.  Employers and their counsel are now required to report a substantial amount of confidential information, including the existence of the attorney-client relationship, the identity of the client, the general nature of the legal representation, and a description of the legal tasks performed.  Such ethical concerns and burdensome reporting requirements could dissuade employers from seeking advice of counsel, which could create a host of other issues during organizing campaigns.  Despite the American Bar Association’s objections to the proposed rule noting that it would undermine both the confidential attorney-client privilege and the employer’s right to counsel, the DOL dismissed such concerns.  Specifically, the DOL explained that the attorney-client privilege is not implicated because the proposed rule does not require companies or attorneys to divulge the substance of what is discussed.  Nonetheless, in light of this overbroad disclosure requirement and the attorney-client privilege concern, the rule may also discourage lawyers from becoming as intimately involved in campaign organizing as they have been in the past.

Given the drastic change to the law and the staunch opposition to the rule, it will likely be challenged in court.  One potential basis for challenging the persuader rule is that the DOL violated the Administrative Procedure Act (APA) by overstepping its statutory rulemaking authority.  Under the APA, a court must hold unlawful and set aside any agency action that it finds to be arbitrary, capricious, an abuse of discretion, or otherwise not in accordance with the law.  Since the rule appears to be directly inconsistent with the statutory language of the LMRDA and overturns nearly 50 years of consistent interpretation of LMRDA, companies may have a strong argument before a court.

Companies will have to abide by the new persuader rule when it becomes effective 30 days after publication, which is scheduled for March 24, 2016.  The new rule will be applicable to contracts as well as payments (including reimbursed expenses) made on or after July 1, 2016.  Thus, employers will have to begin reporting any contracts with a labor relations consultant or other independent contractor or organization under which such a person undertakes activities to persuade employees on how to exercise their rights beginning on July 1, 2016.  In anticipation of this rule taking effect, Companies may want to at least consider hiring in-house labor relations specialist, since this rule likely does not apply to in-house counsel.  Further, given the rather short introductory period, Companies should also obtain written materials for speeches, publications, and other information regarding unionization as soon as possible, and certainly prior to July 1, 2016. Companies should also review their company policies and determine whether any policies concerning or related to union organizing should be updated.

The final rule can be found on the Department of Labor’s Office of Labor Management Standards website in addition to other guidance and assistance for employers. We will keep you apprised of future developments related to this issue.